I was really looking forward to this park after my neighbor told me about a long lost cousin that had an old marina on Boca Grande. He said that the marina is a step back in time, and he was not kidding about that! Sharon and I had never been to Boca Grande, so we were excited to take an overnight to see this park and part of Florida. Whidden’s Marina was everything my neighbor said and more with a laid back lifestyle amongst the condos and million dollar house of Boca Grande! 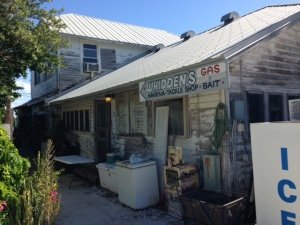 After viewing the marina, we headed over to the state park which is at end of the island and preserves the iconic pass where tarpon rule. Remnants of the storied pass of Boca Grande remain with the old lighthouse well preserved, and some of the old oil tanks where the shipping docks used to pick of phosphate mined in the area in the 20’s. The point with the tanks seemed to be the best place to start, since the tide was whipping around the point. I fished for an hour with out a bite, so I decided to move to the sandy beach area on the other side of the point. I found some bait fish in the surf and decided to fish there with the Yo-zuri L Minnow. It worked, as I caught this nice 4 pound Jack Crevalle, along with another Jack and two lady fish in the last hour. The larger Jack put up a nice fight on the light spinning tackle I use, and made for decent fishing trip.

Sharon finished up a nice painting of the lighthouse which capped off a great day at Boca Grande. The next morning, we decided to stop at the public fishing pier on our way to the next park. The pier is the old railway that moved the phosphate to the shipping port at the end of the island at the park. There is a bridge that goes over an inlet at the end of the pier, and the tide was moving out briskly. I casted the Yo-zuri near a rocky point and caught this unusual “grouper-two-fer” What a nice way to end our trip at Boca Grande! 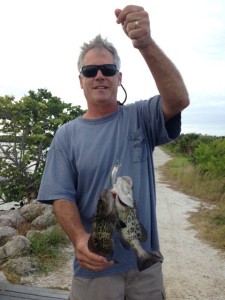