Sharon and I took a long weekend over the 4th of July, and visited several of the state parks in the Panhandle from Marianna to Tallahassee.  The weather was hot, but we did avoid the rain, except for one park….. details later. It was surprising that only a few parks were crowded.

Ponce Deleon had a trail that led to the spring run creek and Sandy Creek. I fished both and had a few bites on the shaky head worm, but could not convert. It was interesting to see the water line where the spring creek meets Sandy creek. Water goes from clear to dingy, and a drop off of 3 feet. This seemed like the perfect spot with the moving water, and is where I had my bites, but none were hooked up.

Falling Waters had a small pond off the run from the spring area. It had a platform out in the water that I could cast to from the dock. I had a nice bass take a swipe at my fluke, but I missed him on the hook set. I could see the bass in the clear water strike, so I think I set up to early in anticipation.

Florida Caverns had a creek run from the Blue Hole which is a super clear spring area where people can swim. I had the entire run to myself, and had several bites on a trick work and fluke but never got one in. The water was so clear, I could see several nice bass swimming along the creek.

Three Rivers State Park is on lake Seminole one of the premier bass lakes in the country. The park only has a small boat ramp and dock. It is referred to as 3 Rivers, since it is where the Flint, Caloosahatchee, and the Apalachicola meet. I had a bass hit a frog on top of the grass that I could fish from the dock, but lost him in the pads. I understand the creek that runs along the camping area is a nice area to fish form shore, but we could not get in that area without a camping pass.

Torreya is an interesting out of the way park, but has no fishing. It sits way up on a hill overlooking the Apalachicola River. An old house is located there that was present during the Civil War. 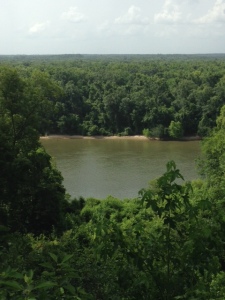 Lake Talquin State Park has a nice dock that runs parallel to the shore. It covers about 250 yards or more. Their is also a nice dock that sits in a cove to fish from. I had a few bites, but was not able to get a hook on anything. 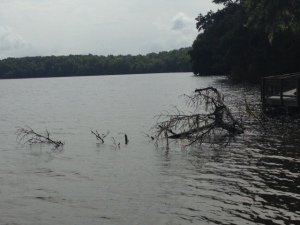 Maclay Gardens is a beautifully kept garden with an old house. We got caught in a thunderstorm and had to scurry up to the house and sit out the storm on the front porch. Lightning was all around us, and it was a little unnerving….. I was able to fish the lake after the storm, but it was overcrowded with 4th of July guests. I had a few bites and did manage to catch a small bass. One of the kids on the dock (around 7 years old) was intrigued by my catch, and wanted to see the bass up close. I tried to get him to hold it, but he was afraid….. When I threw it back in, the bass jumped, and the boy jumped back on the dock like it was Jaws…….