The park is a few other small lakes on the property, and does have camping and cabins for our friends from the north to visit. You can tell it is snowbird season here in Florida, as the park was full of campers, and the cabins appeared full.

I decided to wade on the southern shore of Lake Louisa, and when we got tot he park around 10:00, the beach area was almost empty…..  Wading is one of the most enjoyable ways to fish, whether you are saltwater or freshwater fishing. You get the feeling of being one with the fish…..

The weather was warm in the 70’s, but the wind was howling out the south. This worked well for me since the lake is surrounded by large cypress trees that blocked the wind and made the water fairly smooth on the southern shore.  The water level was up about 2 feet from the last time I visited the park, and this made wading even better since I grass that surrounds the shore was in about 2-3 feet of water. I decided to cast a watermelon fluke and work it around the grass patches. I caught a small 10″ bass on top within the first half hour, so I was happy I did not get skunked. I am only fishing for about 2 hours in each park, so catching a fish, any fish, is a great start.

After a few bites and misses, I saw the water boil in some really thick weeds. I had very little room to hit the target in the weed, and was lucky to land the fluke inches from the boil. Two twitches and a pause, and the fight was on! This was a nice bass, and getting him out the weeds was a battle, and nice jump at the end was beautiful site that my wife happened to catch on her camera! 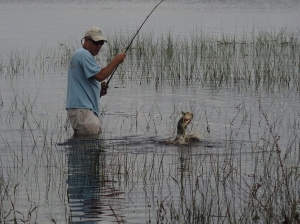 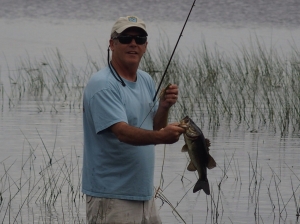 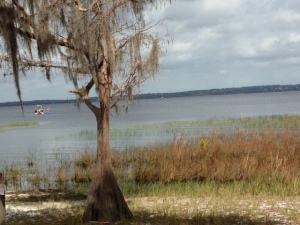